Azimut Yachts has released details of three more new models, as the Italian builder celebrates its 50th anniversary in 2019 with events in five of its key hubs across the world, including Hong Kong. 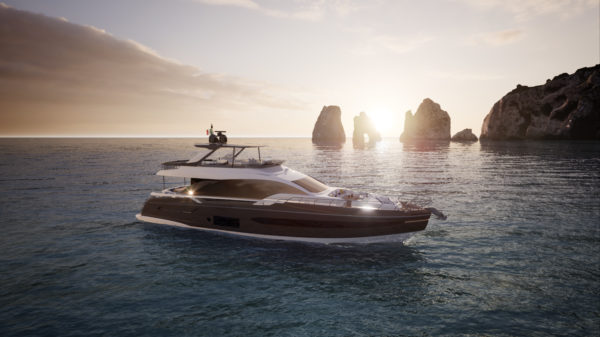 Azimut’s 76 Fly has an exterior by Alberto Mancini

Following news of the Grande S10 – scheduled to debut at the Cannes Yachting Festival in September – and Grande Magellano 25 Metri RPH, Azimut recently showcased images and specs for the Azimut 78 (formerly 76 Fly), Atlantis 45 and Verve 47.

Alberto Mancini has designed the exterior lines of the 78, which is also set for a Cannes premiere. Part of the new carbon-tech generation of Azimuts, the yacht is fitted with a Volvo IPS trimotor propulsion system.

The model has an allocation of spaces typically seen in much larger vessels. The layout focuses on maintaining the privacy of guests on board, so positions areas dedicated to the crew at the bow with access to the wheelhouse and galley. Both areas can be completely separated from the living and dining areas.

Achille Salvagni has designed the interior, with the first version to be presented, Lounge, combining eating and living spaces for greater versatility. When not dining, guests can move freely between two lounging areas, while the dining table can convert to a coffee table.

Meanwhile, Azimut’s Atlantis 45 will be the successor of the Atlantis 43 – which sold over 140 units in four years – and carries on the styling of the Atlantis 51. The hull windows run from stern to bow in a distinctive blade shape, highlighting the lean lines and sporty character of the model, which will feature Volvo IPS propulsion. 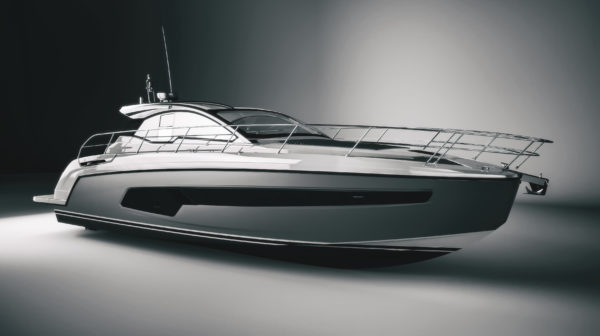 The Atlantis 45 inherits the sleek lines of its big sister

The yacht has a beam of 4.25m (14ft) and features both an owner’s cabin and a guest midships with twin beds that can combine to create a double, while a third bed can even be added. The garage can store a 2.5m tender.

Finally, the Verve 47 has been envisioned for the American market as a fast, high-performance ‘Italian weekender’, and is expected to reach 45 knots with quadruple outboard engines. Only the second model in the Verve collection after the 40, the yacht has a stepped hull conceived by designer Michael Peters, with a bow inspired by offshore racing boats.

Founded in 1969 by Paolo Vitelli, Azimut has also released a global calendar of five events – representing each decade – to mark its 50 anniversary this year, starting at the Bulgari Hotel Marina and Yacht Club in Dubai in late March. The next events will be in New York in May, Cannes in September, Hong Kong in November and finally the shipyard’s home in Avigliana in December.

Giovanna Vitelli, Vice-President of the Azimut-Benetti Group, said: “It’s the perfect occasion to celebrate in iconic locations, all of which are significant to the nautical market. Each of these locations has some special significance for us.

“The first four are dynamic, cosmopolitan cities and to conclude our celebrations in the place where everything first began for Azimut will truly swell our hearts with pride.”