Camper & Nicholsons has been appointed as the Central Agent for the sale of the 65m Benetti Ambrosia, one of Asia’s most famous superyachts. Launched in 2006 and extensively refitted in 2017, Ambrosia has had just one owner and is his fourth superyacht project commissioned from the Italian shipyard. 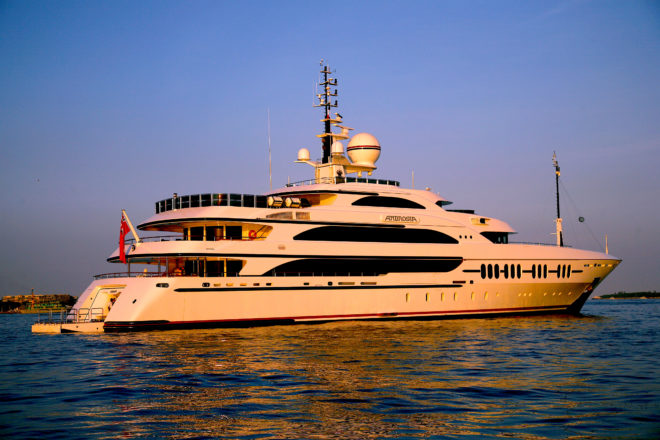 Ambrosia, a 65m Benetti, is for sale through Camper & Nicholsons

Still located in Asia, Ambrosia is a four-deck, 1,640GT motor yacht built to Lloyd’s Classification and is MCA compliant. The yacht benefits from an advanced Azipod propulsion system that delivers a trans-oceanic range and global cruising capability.

Following her successful Lloyd’s 10-year Special Class Survey, she received a full hull and superstructure repaint, new caulking for the teak decks, upgrades to the propulsion drive control system, four new hot water tanks and other improvements to machinery and monitoring systems, plus the audio-visual and IT package.

The Francois Zuretti-designed interior features many wellness areas and lifestyle amenities including a gym, a spa with sauna, and a movie theatre, while there’s also a dedicated medical centre.

The six guest suites comprise a master stateroom with study on the main deck, a VIP on the upper deck, and four doubles on the lower deck. Other interior spaces include the main saloon, which features an opulent dining table, the upper-deck lounge and the sky lounge on the sun deck. An 8.5m limousine tender and a 7.5m jet tender are both stowed on the lower deck, and deployed by aft port and starboard cranes. 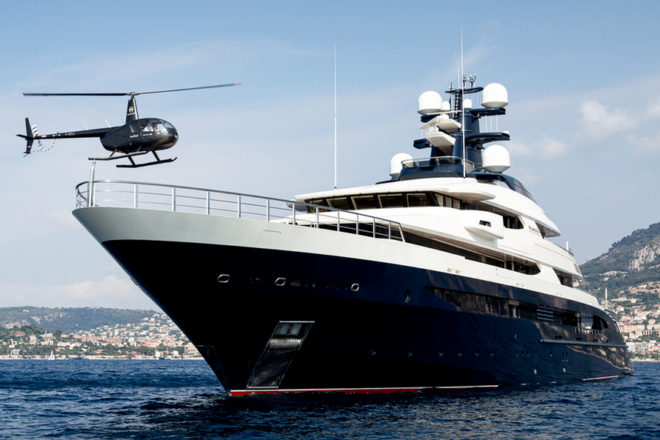 Tranquility is a 91.5m Oceanco build, recently based in Malaysia

The 91.5m Tranquility is also available for sale with Camper & Nicholsons. Built to Ice Class and PYC compliant, the 300-footer launched by Oceanco in 2014 has an Andrew Winch interior featuring accommodation for up to 26 guests in 11 cabins catered for by 31 crew. The former Equanimity, sold to Genting Malaysia last year, is certified to cruise with up to 36 guests on board.

Features include a spectacular beach club that transitions through to a gym with glass doors leading to a sea platform on the starboard side, and an indulgent spa suite with a sauna, Hammam, experiential showers, plunge pool and a massage, hair and beauty salon. The aft upper deck has a large jacuzzi and an outdoor bar, while there’s another jacuzzi forward on the upper deck, an area directly accessible from the master stateroom.

The new 41.1m power catamaran Royal Falcon One is also for sale with Camper & Nicholsons. The yacht was developed by the Singapore-based Royal Falcon Fleet, designed by Porsche Design Studio and built in Sweden. 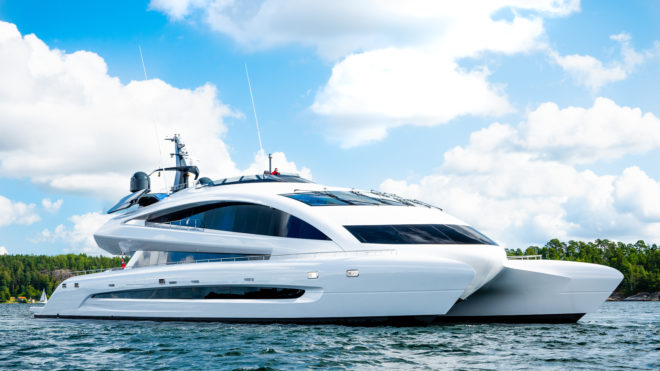 The five guest suites comprise a full-beam master suite and VIP suite on the upper deck, and three guest cabins on the main deck. Forward of the main saloon is a panoramic observation lounge, while the sun deck features a jacuzzi and sunpads.

In Thailand, Sebastien Bernard has been appointed as a sales broker in Camper & Nicholsons’ Phuket office. With over 20 years of professional experience including over 10 years in Asia, the Frenchman has spent the last seven years in Phuket as Managing Director of Raffles Yachts Asia and working as a senior yachting consultant.

Bernard’s career includes 11 years as the Captain of a luxury yacht, while he has managed yachts, crews, projects, business units and yachting companies for renowned brands such as Nautor’s Swan, Alloy, Jongert, Azimut, Sunseeker and Sunreef.

Carmen Lau, Managing Director and Board Director of Camper & Nicholsons Asia, said: “Encompassing prestigious private members’ clubs and marinas in Japan alongside its multiple luxury hospitality offerings, Riviera’s ethos and client- base sits in perfect alignment with Camper & Nicholsons’ own rich brand pedigree. We very much look forward to enjoying a long and prosperous business relationship.”