Along with several other Ferretti Group yachts, the new Custom Line 106’ will be at the inaugural Venice Boat Show from June 19-23, although the model will only be seen at an exclusive invitation-only event. Its official world premiere will be held at the Cannes Yachting Festival from September 10-15. 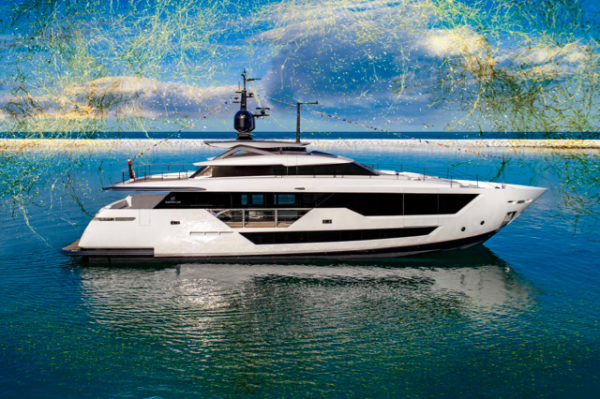 The first 106’ was launched at the Ferretti Group Superyacht Yard in Ancona and joins the 120’ – itself only launched last year – in Custom Line’s planing range. A 120’ and two Navetta 33s are scheduled to arrive in Asia in the coming months, the former in Hong Kong and the latter models in Thailand and Hong Kong.

The 120’ was the builder’s first model by Francesco Paszkowski Design and the Italian studio also handled the design of the 106’ in collaboration with the Ferretti Group Engineering Department and the Product Strategy Committee led by the engineer Piero Ferrari.

The yacht has an overall length of 32.83m (107ft 9in) and a beam of 7.41m (24ft 4in), and its hull is designed to replicate and build on the planing range’s hydrodynamic performance.

A wide, trapezoid cut-through on the bulwark is one of the most distinctive features of the exterior and opens up views and light from within the saloon, making the most of the large, full-height windows. The full-beam master cabin is forward on the main deck and the lower deck has four en- suite guest cabins – two VIPs midships with window-facing beds and two twins forward. 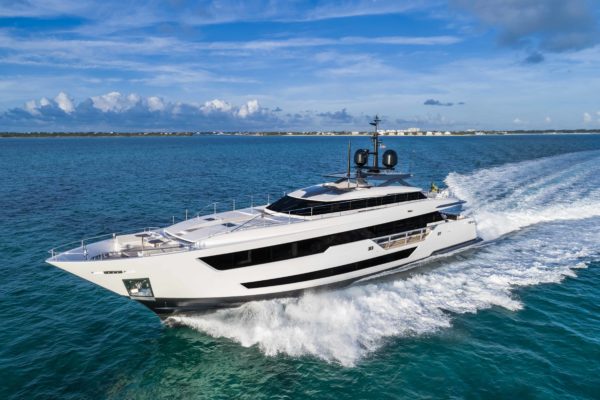 The cockpit has an aft-facing sunpad as well as a sofa, table and chairs, while the flybridge can be customised. The flybridge offers access down a few steps to the wheelhouse, which is otherwise reached by stairs from the galley, situated midships on the main deck.

The starboard side deck leads up steps to the foredeck, which features a C-shaped couch, further seating forward and a central walkway down to another large social area, featuring two double sunpads.

For the new model’s first hull, the entire interior design scheme was customised to the owner’s requirements and tastes.

“The nautical and aesthetic qualities of the Custom Line 106’ are unbeatably rich. As with homes, when it comes to the finest yachts, rather than just buying them, you make them,” said Alberto Galassi, CEO of Ferretti Group.

“This is the quintessential sense of being and creating at Custom Line. It is the only way to ensure the specific requirements of owners and their families are met, so giving rise to yachts guaranteed to set a new benchmark in the field.”

The original article appeared in Yacht Style, Issue 47. Email for print subscription enquiries or subscribe to the Magzter version at: www.magzter.com/SG/Lux-Inc-Media/Yacht-Style/Fashion/