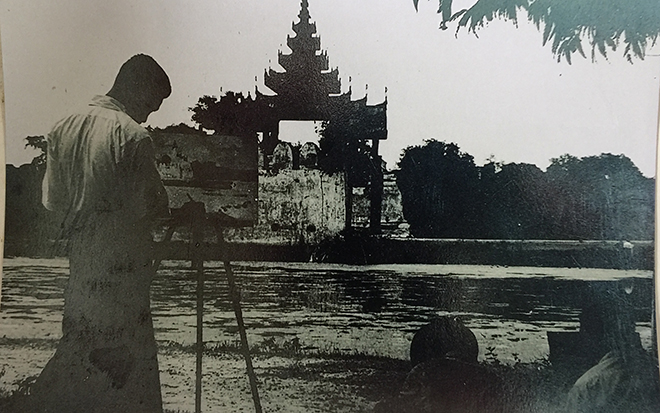 As an art historian with great intrigue with contemporary Burmese dexterity, Marie-Pierre Mol established the Intersections Gallery. Founded in Singapore in 2012, Intersections is interested in artworks which tell a story and crystallize encounters between different art forms – A vision that is depicted in the gallery’s logo of two intersecting shapes. With a mission to bridge cultures through the arts, Intersections represents artists based in Southeast Asia, with a primary focus on contemporary Burmese art. The gallery owner strives to discover and develop young talents through eclectic and purposeful exhibitions, offering custom services to make any place arty (offices, hotels, private homes)  or to build an art collection.

What started as a miniscule pop-up gallery concept targeted at inciting an inherent curiosity for the arts, quickly grew into a major industry-player. Not only was the gallery honored with the opportunity to present two Burmese artists at the Art Stage Singapore 2015, it was also one of eight guests of honor at the Art Paris 2015 fair, where the works of one Singaporean and two Burmese artists were showcased on full display. 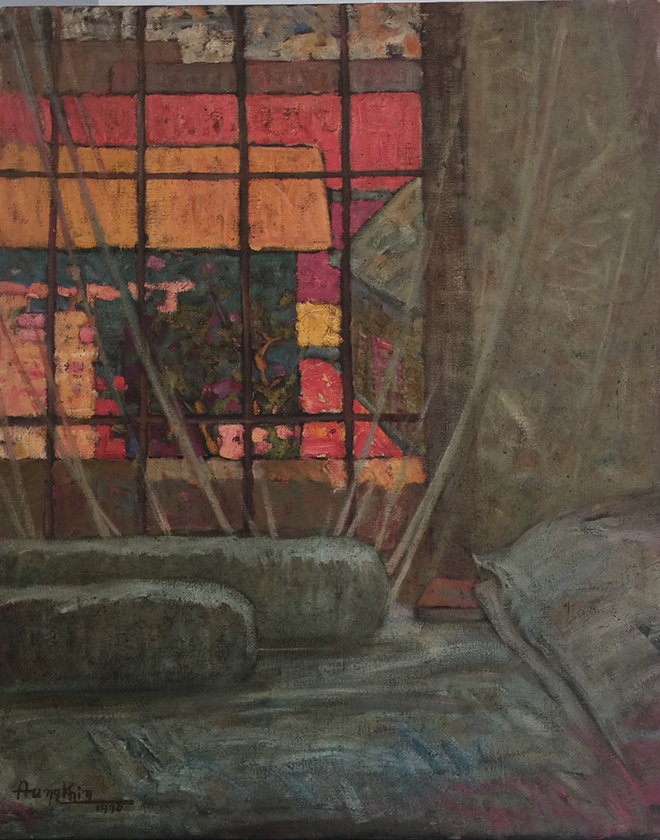 It was love at first sight when I discovered U Kang Khin’s paintings in his family house in Mandalay. Unveiling U Aung Khin’s immense talent and unique style to the world immediately sounded like a thrilling endeavour for Intersections which champions Burmese art.

I knew  that Burmese modern art was the missing link for amateurs and collectors to understand Myanmar contemporary art, and the very large family collection allowed to present the whole artistic career of one of the most prestigious pioneers of modern art in Myanmar. It was only one piece of the puzzle, but a central one.

U Aung Khin’s life had been so eventful and extraordinary that it could be made into a movie. I thought a book would be perfect to introduce modern art not only to amateurs but also to the general public. Through the prism of  artworks spanning 1937 to 1996 the book would invite readers to  embark on a historical journey, first from the beginning of the nationalist movement to the country’s independence, then from the fight of the young democratic nation to unite a mosaic of various ethnic components to the dark years of the military regime and the self-imposed confinement of the country. 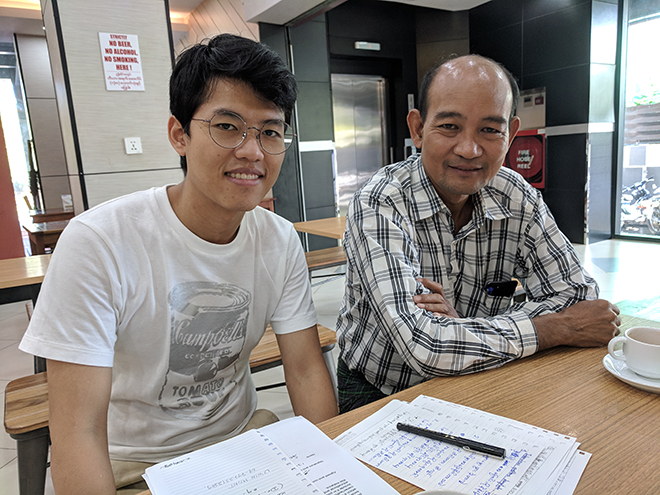 You have been an ambassador of Burmese culture and art for the past decade in Singapore and across South-East Asia, how much influence has U Aung Khin had on the new generation of Burmese artists?

U Aung Khin had a huge influence on the new generations of Burmese artists by showing a new way. Traditional artists were trained in the workshop of a Master and had followed the rules they had been taught. During the colonial time, new canons were introduced by the British and an Anglo-Burmese academic style developed. By both his choice of colours and subject matters Aung Khin taught boldness to the new generations. He did not encourage them to follow his style but to look for their own formalistic approach. He inspired a freedom of expression, which allowed the hatching of contemporary art in Myanmar.

For this reason, I decided to give voices to contemporary artists. Thus, in this book, the role played by U Aung Khin in the development of modern art in Myanmar is mainly assessed and articulated by contemporary Burmese artists.

As an illustration, for Aung Ko “At his time and context no one was painting as boldly as him”. Khin Zaw Latt also mentions Aung Khin’s use of bold colours while a street artist like Wunna Aung explains how Aung Khin’s practice confirmed him in his endeavour of creating truly Burmese works with Western elements. Interestingly, all the interviews were conducted by Victor Paul Brang Tun, who is himself a young Singaporean artist of Burmese and Kachin origin. 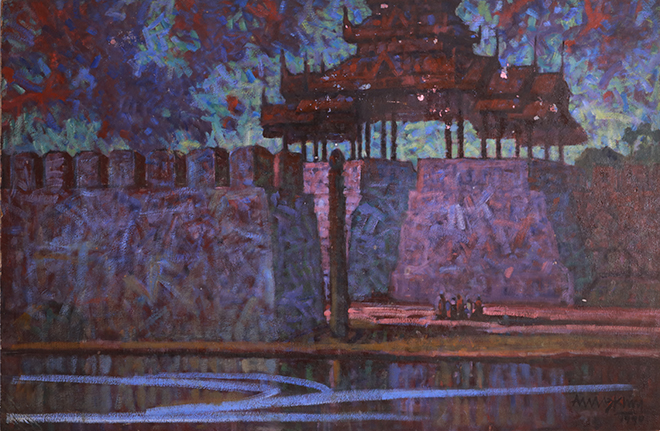 U Aung Khin never travelled to Europe and France, yet there is a visible influence from the impressionist and cubist movements in his art. Could you tell us more?

The influence of the impressionists but also of the post-impressionists and cubists can be seen in his brushstrokes, his colour palette, his depiction of the light in the dark and in the composition of his works as well as in his subject matters.

Like the impressionists, U Aung Khin enjoyed practising outdoor painting with his fellow artists, and like Monet, he often represented the same subject matter with different lights and hues.

In the 60s, Aung Khin painted a series of family portraits and intimist subjects matters, in the same vein as those of many 19th century French painters. While the Mount Sainte Victoire was an iconic subject matter for Cezanne, the Mandalay moat was the same for Aung Khin, a memory of the last capital of the Burmese Kingdom, a celebration of Mandalay which, during the colonial times, had never ceased to be the cultural capital of the country and a strong symbol of the National identity.

Regarding cubism, Cho Cho Aung, the artist’s daughter, shared with us that Aung Khin created a large series of cubist paintings in the 1970s but later destroyed most of them without any explanation. What we know for sure is that his sketch books include many studies of compositions in a cubist style which attests to Aung Khin’s interest for this technique and his extensive exploration of this style. 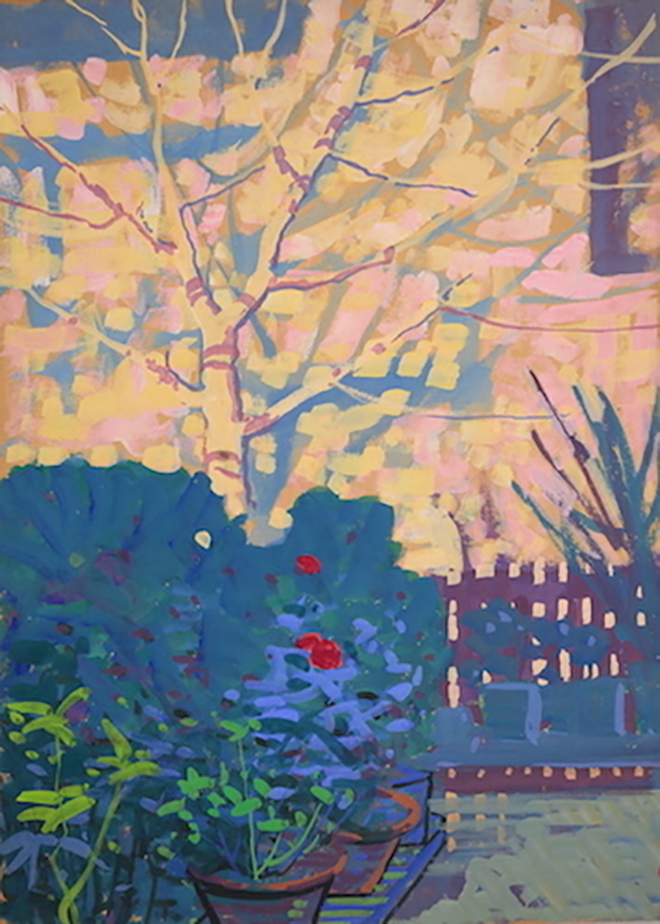 Where in Myanmar and across SEA can art lovers discover works by U Aung Khin?

The artworks can exclusively be viewed in the family house in Mandalay, where a small museum has been established by the family. However, only a selection is on display. The Singapore Art Museum and the National Gallery Singapore own artworks by Aung Khin. Unfortunately, they are not showcased in the museum’s permanent collection.

One of my hopes from publishing this book is that regional institutions will be interested in exhibiting works from U Aung Khin’s breakthrough series in their future exhibitions.

How exposed and well known are the contemporary Burmese artists in the international art scene? Is the Burmese government supporting art fairs and art education in modern Myanmar?

Contemporary Burmese artists have gained more international exposure during the last decade thanks to the support of major institutions such as the Singapore Art Museum, the National Gallery Singapore, the Fukuoka Art Museum in Japan, Queensland Art Gallery in Australia, Palais de Tokyo, in Paris, France and the Asian Society in New York, USA. Burmese contemporary artists are now regularly invited to participate in the numerous biennales and triennales which have flourished in Asia but also in Europe like for instance at the 2015 Lyon Biennale in France.

The young generation benefits from many international residency programmes. In Singapore, NTU Centre For Contemporary Art has welcomed a significant number of Burmese artists. Regarding art fairs, Art Stage Singapore and SEA focus have offered a great exposure to contemporary Burmese artists. However, there is still a deficit of knowledge about the contemporary Burmese art scene due to a lack of literature and the artists do not receive any support from the government.

The number of local collectors is still very limited in Myanmar and the examples of China and Indonesia show the crucial role of such collectors in particular in the initial stage. That said, this may change with the new generation.

Regarding art education, during the military regime, only traditional techniques were taught in the schools and at university and all the contemporary artists considered themselves self-taught as far as contemporary forms were concerned.

The situation is changing with the new government but there is still a long way to go and artists still rely a lot on the Foreign Foundations and institutions, which have opened their doors in Yangon, and on international programmes. Has the Burmese government supported your initiative and the publishing of this book?

No, this book is self-published by Intersections and Re-Creation, my partner for this project, based in Phnom Penh Cambodia, with the support of a limited number of sponsors.

Burma has a long tradition in arts, painting and sculpture. Tell us more about the Pagan era and how vibrant the art scene was back then?

When King Anawratha founded the first Myanmar empire in the 11th century, he installed his capital in Bagan. The thousands of pagodas scattered in the vast plain of Bagan testify not only of the power of the empire but also of the artistic sophistication of its civilisation.

Geographically located between India and China, Burma has ingeniously appropriated the best of the Indian and Chinese cultures to create its own arts and crafts as we can see in the elegant wall paintings, masonry and stone carving of the temples but also in the literature and poetry which started flourishing at this time.

The famous and exquisite lacquerware of Pagan also dates back to these old times. It is during the Bagan era that the 10 skills defining Burmese art, also known as the Ten Flowers of Art, were listed. Painting is only one of these skills, the others being, Wood and ivory carving, Blacksmith work, Casting, Stuccowork, Turning, Stone Carving, Masonry, Goldsmith work, Lacquer ware. This list was found in stone inscriptions illustrating the high esteem attributed to art. Other modern Burmese artists you would like to draw a special attention to?

Everyone interested in contemporary Burmese art should start with the comprehensive collection of the National Gallery, Singapore which includes old masters as well as modern and contemporary artists.

I particularly love the watercolours of Bogalay Kyaw Hlaing  (1914-1996) who, like U Aung Khin, studied under the great Master U Ba Nyan. Bogalay Kyaw Hlaing is famous for his depictions of cloudy skies. U Ba Lon Lay (1922-1998) is also an interesting artist for his unique style when doing propaganda paintings. Last but not least, I would like to mention Maung Ngwe Tun (1935-1992) famous for his sketching technique and for a series of portraits of famous Burmese people.

Furthermore, I would like to pay a special homage to the wonderful modern artists who agreed to be interviewed for this book: First U Win Pe and  Ko Ko Gyi, respectively born in 1936 and 1937, who are still painting and exhibiting with an amazing creativity and energy but also Kyaw Moe Thar, Ko Ko Gyi’s younger brother, who was very close to U Aung Khin, and of course the artist’s daughter Cho Cho Aung.

If you were to name a mentor who has inspired you in all these years discovering and promoting Burmese culture and artists, who would that be?

Without hesitation, I would name Paul Durand-Ruel, the French art dealer, who relentlessly supported and promoted the impressionists who were only recognized at the very end of his life. His passion, his unwavering confidence in his artistic choices, his resolution in achieving his goals against all odds are a great source of inspiration. He is the light in the dark when I am not sure which path to follow to get recognition for Burmese artists, he is the voice telling me to persist and never give up. 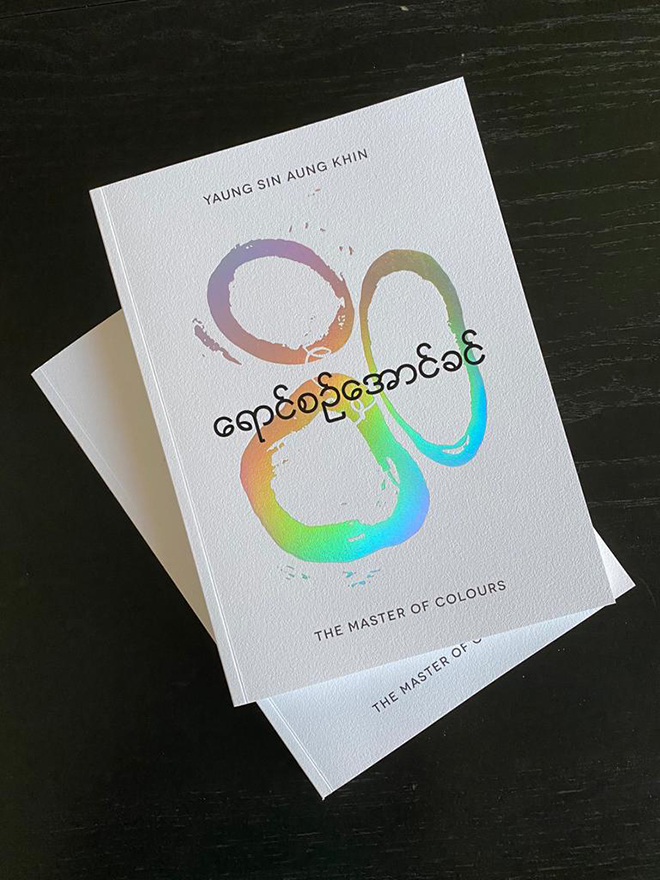 The title of the book, “Yaung Sin Aung Khin” is the nickname that was given to U Aung Khin by his fellow artists. Translation is always a difficult exercise and translating from Burmese language to English is particularly difficult because we rarely have one precise equivalent in English. In this case, we believe that The Master of Colours expresses best the admiration of all the artists whom we have interviewed for Aung Khin’s colour palette. The image on the book’s cover is derived from one artwork titled “Sound” which belongs to his series of abstract works. In his interview Ko Ko Gyi said “in Aung Khin’s paintings you can see sounds and hear colours”,  this is what we tried to creatively express with the book cover.” For more information and to order the book contact Marie-Pierre Mol at   or visit intersections website  https://www.intersections.com.sg/aung-khin-book.html